The City of Chesterfield will host the January 24 membership meeting at the Chesterfield City Hall located at 690 Chesterfield Parkway West 63017. Refreshments will begin at 6:30 pm with the meeting getting underway at 7:15 pm.

As Sector Commander he is responsible for Coast Guard operations in eleven states and over 2,200 miles of commercially navigable waterways on the Upper  Mississippi, Missouri and Illinois rivers and their tributaries. He leads 280 active duty, reserve, and civilian personnel and over 1,100 CG Auxiliary members, five river tenders and three Marine Safety Detachments. These men and women promote safety, security and environmental protection while facilitating more than $41 billion in commerce supported by the inland river system. Captain Stoermer serves as the Captain of the Port, Officer-in-Charge Marine   Inspection, Search and Rescue Mission Coordinator, Federal Maritime  Security Coordinator and Federal On-Scene Coordinator for oil spills and hazardous materials releases.

Captain Stoermer was born in Ft. Polk, LA; however, as a proud Army brat and second-generation military officer, Captain Stoermer has lived in 17 different locations. He graduated from the U.S. Coast Guard   Academy in 1996 with a Bachelor of Science in Marine and Environmental  Sciences. He also earned a Master of Science in Oceanography from the University of Rhode Island’s Graduate School of Oceanography and a  Master of Public Administration from American Military University.

Thanks in big part to Carl Lumley of Curtis, Heinz, Garrett and O’Keefe who drafted the legislation, we worked with Senator Emery to    pre-file SB 207, which establishes an administrative adjudication process for of municipal ordinance violations.

Many of the recent criticisms of municipal courts arise from the quasi-criminal model that has been followed.  Under this structure, action cannot be taken by the court unless the defendant appears in person or by an attorney. For defendants who fail to appear, courts have had to use warrants, arrests, bail, and even incarceration to try to get the person in court so cases can be resolved.

The proposed change to Section 479.011 would expand an alternative solution that has only been available in a few cities, making it available to all. This alternative model would follow a civil/administrative hearing process for lesser ordinance violations.  For those defendants who are served with summons but refuse to appear, a default judgment could be issued by the law judge and the case would be concluded.

This is how other civil matters are resolved, such as claims by utility companies for unpaid bills.  Court dockets would not continue to bog down with open cases. There would be no need for warrants, arrests, posting of bail or incarceration, to the benefit of defendants and the courts. Cities would still have to follow standard collection practices for any unpaid fines, but the cases would be closed.

For those defendants who do appear, they would still have all applicable due process rights including notice, hearing and judicial review by circuit and appellate courts.  Standard rules for administrative hearings would apply.  For traffic violations, points would still be assessed when applicable, so that  drivers committing violations would not evade licensing requirements.

At the November meeting, the membership heard a presentation from Jeanie Sanders of General Code Corporation who had been invited to discuss eCode360 and MapLink. These  programs connect municipal GIS mapping systems to zoning codes systems to provide a great deal of on-line information about properties throughout a city. She said that large zoning tables would not need to be printed in code books as they could be downloaded for easy viewing. The program can show all different zoning codes for a particular city and also allows for viewing of specific properties and the available uses for the site. Properties can be selected by address or   parcel number and the user can get information on the zoning category, acreage, dimensions, parking regulations and permits required for development. The program also shows aerial views of the property. These programs can be a very useful tool for municipalities and developers seeking easy access to information about particular properties.

We appreciate the hospitality of Mayor Josh Voyles and the officials and employees of the City of Fenton, who hosted the meeting.

In April 2017, 63% of the  St. Louis County voters approved Proposition P. The proposition authorized the collection of a      1/2 cent sales tax dedicated to public safety. The ballot called for St. Louis County police to receive 3/8 of the tax and the remaining funds to be distributed throughout the county on per capita bases.

Based on your input and recent municipal developments, the 2019 tentative Academy training session topic schedule has been established as follows:

We want to thank all of our members for their continued  support and input, keeping the Academy a success. Since 2012, more than 600 public officials and employees have now received a lot cost educational training through the Academy.
The one-time attendance rate is $20 per session per person. We encourage members to take advantage of the tuition based membership so all city officials and employees can reap the benefits of each training sessions throughout the year.

Also, all city officials and employees will have access to past training sessions of the Academy. The 2019 tuition rates are:

Any city financially unable to afford this amount may apply for need-based tuition waiver; for more information please contact the League office. The volunteer services of the Municipal League of Metro St. Louis, Cunningham, Vogel & Rost, P.C., and all of the speakers and administrative support are provided to help our members to be as professional, knowledgeable, and effective as possible.

Tuition payments are due February 8, 2019. Please contact  Steve Ables by email at staff@stlmuni.org or phone at 314-726-4747 for registration and any additional questions. 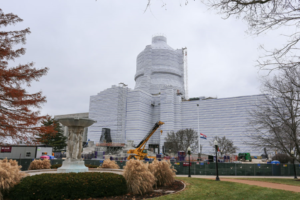 The Missouri State Capitol is undergoing a full exterior renovation for the first time since the building was constructed in 1917. The project officially began in March 2018 and is set to conclude by December 2020 — just in time for the governor’s inauguration in January 2021.  With a budget of nearly $27 million, 50 to 75 construction workers will modernize the deteriorating stonework of the building’s façades, dome and drum. The Capitol’s south lawn will serve as a staging zone for the construction, with cranes and scaffolding surrounding the building. During the project, eastbound traffic on Capitol Drive will be diverted onto West Main Street, while westbound traffic will condense from two lanes to one. Upon completion, the project will improve the structural stability and overall appearance of the State Capitol, ensuring the historic structure is preserved for decades to come.

To the left is a picture of the bronze statue, Ceres, the Roman Goddess of Agriculture which after nearly a century on top of the State Capitol dome was removed as part of the restoration. The statue was shipped to Chicago to be restored which is estimated it will take about a year.

According to the Missouri State Capitol Commission (MSCC), Ceres was selected to stand atop the Capitol “to signify the importance of agriculture to the State of Missouri.” In her left arm, she cradles a bundle of grain.  When installed in 1924, “a winch was tied to an elm tree and a pulley system was used to hoist her in three pieces to the top of the Capitol dome,” according to the MSCC. The statue weighs approximately 1,500-2,000 pounds with the heaviest piece weighing 900 pounds. It stands 10 feet, four inches tall.

State officials are also considering renovations and repairs to the interior of the building, although the length of the project and the potential costs are still unclear.  One consultant hired by the Office of Administration said the interior renovations could take up to seven years. State officials have been considering overhauling the offices, hearing rooms and marble-lined corridors inside the century-old building for more than a decade.  Cost estimates are expected to be completed early this year. 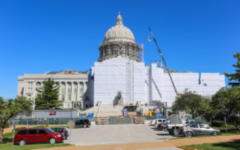 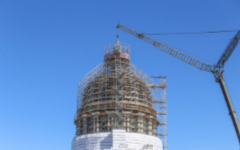 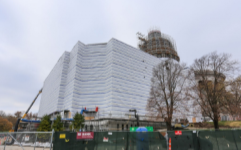 Medical Marijuana in the Workplace

Amendment 2, the constitutional amendment allowing the use of medical marijuana in Missouri went into   effect December 6.  Under the new law, qualified patients who have approval from their physicians will      receive identification cards from the state that will allow them and their registered caregivers to grow up to six marijuana plants and purchase at least four ounces of cannabis from licensed dispensaries on a monthly basis.

The Missouri Department of Health has 6 months or until June to develop the state’s regulations and implement the new law.  This means you could see your first applicant or employee with valid medical marijuana card in late 2019.

Municipalities need to review zoning codes to determine where marijuana manufacturing facilities and     cannabis dispensary can operate.  Equally important, municipalities need to address medical marijuana in the workplace.  As more and more states approve the use of medical marijuana, the courts are siding with employees when policies are challenged, so careful review is important.  Below are some suggested areas for consideration:

Interim Assignments – When managers/administrators, department heads or other staff members elect to retire or take a job elsewhere, the workload of the remaining staff picks up – often resulting in added stress and frustration.  It typically takes about three months to find a replacement.  A temporary employee can help fill the void in the interim and some can even assist in vetting candidates for the permanent position.

Project Work – A project needs attention, but staff can’t get to it because of time constraints or lack of   expertise.  Examples include: how best to address aging water meters; review of a debt restructuring/refinancing; preparing for a bond rating review, developing or updating a capital improvement program; updating a municipal code or comprehensive plan; reviewing personnel practices and systems to ensure compliance with laws and competitiveness with the market.  Skilled temporary employees are available to assist with project work.

Seasonal Activity Levels – During the warm weather months, construction activity increases.  Permit clerks, inspectors and plan review technicians are putting in extra hours and the job becomes more stressful.  Residents and builders want their permits approved right away.  Similarly, in the summertime property maintenance violations become more prevalent. Residents and elected officials want immediate responses to complaints.  With reduced staffing levels, communities don’t always have the resources available to respond that quickly.  In these situations, whether in a full-time or part-time capacity, temporary employees can help fill the void.

Succession Planning/Mentor – The heir apparent to the new department head level position is technically qualified but needs some coaching to understand and effectively manage the crucial people management aspect of the job.  The solution: pair the worker with a retired, seasoned manager made available through a temporary agency.

Outsourcing – Troubled with the high cost of municipal benefits – notably health insurance and pension – many towns have opted for a permanent outsourced option.  These arrangements – full-time or part-time – are renewed on an annual basis.  Outsourcing can be applied to many positions including administrative personnel such as customer service clerks, finance directors, HR managers/generalists, IT and managers/administrators.  Recently retired and in-transition local government professionals, as well as emerging government leaders are available for outsourced assignments through a temporary staffing agency.